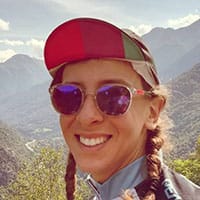 Phew, well prepared and ready! We left on April 8th.
One of the most beautiful days Berlin 2018 had to offer so far. We started from Tempelhofer Feld. For the first 30 kilometers we were accompanied by a cheerful group of about 20 cyclists, colleagues, and friends. We stopped for the first time due to a flat tyre, luckily nor Yves nor myself were affected. The second time we stopped for beers, fries and homebaked pastries at Müggelsee. It was truly a beautiful farewell, we could have not imagined anything better. Thanks :**!!! After a few tears, Yves and I rode on by ourselves, we immediately found a great place on a lake near Königswusterhausen.

On the first day, we also witnessed the death of both our GPS systems. As they say in German: “A new life begins, and an old life goes on”. Welp, Mimo had to navigate from now on and because her GPS could not load a map anymore, she had to try to follow a line on the screen. This strained Yves’s nerves, who loves to navigate and whose GPS had completely died. We were only able to solve the problem about 780 km further in Vienna.

Germany said goodbye with its most beautiful face. We rode through the Spreewald and boldly camped outside the city of Lübben next to the cycling/walking/dog path (courageously within our so-called “idiot radius”, which we otherwise avoid). Nothing happened.

In Lausitz we found multiple huge mining lakes - very cold but good for a quick refreshment and very hygienic - perfect for camping.

Then we rode to Dresden, to Mimos ex-roommate / girlfriend / little chicken Jenny plus friend Matze and roommate Stefen. We occupied Jenny’s room for 3 nights, and clarified the situation with our GPS devices. We chatted a lot, cooked, ate, chilled-out. It was nice that our final farewells from home were a bit protracted.

We went on along the Elbe in Saxon Switzerland to the Czech Republic. Eventually, we said goodbye to our outrageously good cycling roads.

We were no longer in Germany, now the adventure could really start! The nature became wilder, it became mountainous, we camped wild, serveral days in a row.

Through Hřensko we rode into Czech Republic, saw Sudeten villages with beautiful decorative wooden architecture, and the cherry trees were already in bloom. The villages are marked by their history, there is a poverty that we did not observe in other parts of Czech Republic, but there is also a very evident hospitality. Due to the heat (25-35°C) we needed a lot of water, which we always acquired from people, 2 old ladies and an old man even invited us to a massive piece of home-baked cake. “Hello, hello, dobrý den, voda???” Haha, we could speak zero Czech.

At first, we were still slightly concerned about wildcamping, but in theory Czech Republic is made for it. At one of our best spots we stayed 2 nights, the rain was pouring all day and Mimo had a sore knee. We made ourselves comfortable, and played Flux (highly recommendable card game), we also discovered 4 ticks on us, each.

Due to the rain, we searched for an accodomation on Warmshowers (couchsurfing for cyclists) for the upcoming night. We ended up with Lucy, Tomáš, and their 8-year-old son Oskar. The three are super enthusiastic and experienced cyclists, and campers. During a very delicious Indian curry Tomáš had cooked, they reported on their adventures in Eastern Europe, and their plans to soon go on a longer bike trip with Oskar.
Oskar, whose favorite animals are clearly snakes, was totally open and enthusiastic about us. Mimo learned a lot of Czech from him. He also drew a picture of us, on which he depicted Yves’s beard precisely.

Cycling in the Czech Republic was quite challenging, especially as we were not well trained after the winter. Some climbs were impossibly steep and we had to push. The cycling paths and roads were quite good except for a very special experience. The experience goes like this: immaculate asphalt gradient 5%, brittle asphalt gradient 10%, gravel gradient 12%, mountainbike trail gradient 13%, stream incline 15%, roots incline 18%. And since we are quite stubborn and have no mood for detours, we had to push up there.

We rode through many national parks with suspension bridges - Yves felt it was important to mention it. We saw a lot of roebucks from very close distance - beautiful animals! We saw so many different species of birds we had never seen before. I will always connect the sound of woodpeckers pecking on trees this time of the year, with Czech Republic.

There are also pretty little towns in Czech Republic: Poděbrady, Kolín, Kutná Hora. We quickly visited them, had a beer here, and a Kofola there. Kofola is the Coke which existed since the Soviet times in Czech Republic, it tastes like Cola and herbal liqueur, without the taste of alcohol, or something like that… a matter of taste.

Austria was a short but dramatic leg of our journey. There was an accident!

After crossing the Czech-Austrian Podyjí National Park, Mimo had a fall with the GoPro straped on her shoulder, perhaps a bit cocky, on a short descent, in a sharp turn, on wet asphalt. The result was a heavily abraded elbow, and an even more wounded knee. After a few cars and tractors passed by, a women stopped and told us that the village doctor’s office was to be found in the church.
It was an unusual doctor visit! It took a lot of time, one and half hour. I received very good advice, although I did not understand the probably Chinese-born doctor, because of his likeable Asian-Austrian dialect. There was also a small dispute between the nurse, who wanted to give me a lot of bandages, and the doctor who was on austerity measures.

Fresh out of the doctor’s office, we went on to ride 100km to Vienna. It was a pleasant ride, the wounds only hurt moderately with movement, and we had very nice bike roads through the vineyards, with beautiful wine cellars, and later along the Danube.
Due to Mimos injuries, out of disinterest in sightseeing, and lack of Vienna tips we decided not to go on a detailed tour around the city. We preferred to spend our days with our hosts Anna and Florian at home, who were planning a similar bike tour through Europe. We chatted, cooked, and ate together - we were blessed with two great hosts again!

On our last day we picked up our new GPS device from our diligent helper Stefan, friend of friend of Yves, who had kindly provided us with his address for shipping. Yves’s joy was indescribable.

We continued along the Danube. A day’s ride from Vienna is Bratislava. In Slovakia, we were greeted by friendly cyclists, at least 5 of whom wore Peter Sagan jerseys.

We rode to our host Michal - sportmaniac and outdoorfan - a friend of a friend of a friend of Yves. We explored the little capital a bit. In the evening Michal showed us to a rustical pub where we had a few pints. In addition, we had a typical dish Hermelín, pickled in oil, a camembert-like soft cheese, served with bread. Delicious! Good substantial bread was unfortunately hard to find elsewhere in Slovakia and Czech Republic. This situation was terrible for our digestion.
Oh yes, a little pro-tip: The cheapest ice cream from the supermarket - fruit sorbet with chocolate coating - divine!

After Bratislava we went back on the Danube route, whose quality kept on deteriorating. At some point we cycled only slowly against the wind in ~10cm deep river pebbles. The air was often filled with pollen or small flies - super annoying and ticklish experience. As a reward for our efforts we found great campsites right on the Danube’s shores. Due to the heat and the light conditions they reminded us of tropical mangrove forests. Our picture depicts the so called “Thailandspot”. Due to the clear water, we had no inhibitions to bathe, swim, and to wash ourselves completely, how comfortable!
Besides the undisturbed nature and the numerous beehives, we also sighted the first other bikepackers.

It is wonderful to travel by bike, it gives you time to witness a lot, it makes it easy to meet total strangers. However, it is sometimes very hard, one gets to their physical and mental limits. It is a daily workout. At the end of the day, we always feel that we deserve these beautiful experiences along the way, that’s a nice feeling.

From now on there will, hopefully, be a monthly update from us! Greetings from the currently inhumanly baking Istanbul.

Plan your world tour by bike: To Do